We’ve had our first death on our piece of paradise.  Yes, sadly we’ve lost our ram.

Two days before his demise, Mr Ram had been happily socialising with his harem in the paddock. Twenty four hours later the man moved the flock into another field, and although the ram was not as fast as he normally was, all seemed OK.

On the day of his death, I found the ram lying in the paddock. His girlfriends were keeping their distance. After getting the man’s opinion about whether a sleep-in was normal for a sheep on a statutory holiday, we rang Karl, our tenant farmer. Coincidentally, Karl happened to be driving past our place at that exact moment, so he turned his ATV hard left up our driveway and was tending the sick animal within milli-seconds of our SOS call.

His initial assessment was that the ram might have caught pneumonia, but as our tenant farmer’s expertise lies with dairy cows rather than sheep, he said he was going to get a second opinion from someone who knew more than he did. Fair enough.

He then hopped back onto his John Deere and left.

An hour or so later he was back with a drench pack and possibly a pocketful of drugs ready to do the para-medic thing. Sadly, it was too late, the poor ram had taken his last breathe about 30 minutes before.  To this day, we don’t know why. It could have been something he ate, old age, or even a nasty worm-thing that is picked up when grazing and kills quickly.  Or it could have been something else entirely. The chances are we probably will never know.

As a precaution, however, the other sheep were drenched.* I am pleased to say they are alive and healthy. 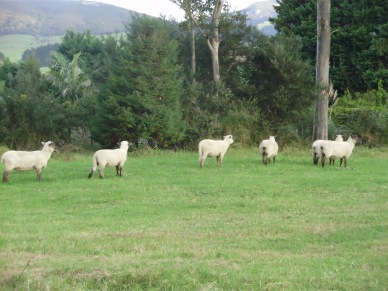 *Our small cattle race is proving a total asset.

Since January 2017 we have lived in Whangarei Heads on a lifestyle block. When we moved here, our aim was to say goodbye to the 9-5 slog and work from home as soon as we could. To this end, Grant started Three Fish Woodworks, a bijou event hire and woodworking business which follows the principles of slow living. Now retirement age, it has panned out for Grant as planned (follow this on the blog: Threefishwoodworkshire.com). Heather, meanwhile, intends to retire within the next few months, although there wont be a pension for her for a few years. To achieve this requires careful planning and a well thought out budget - after all we want our retirement to be enjoyable and we do have a bucket list of dreams to achieve! Follow this journey to retirement and beyond on the blog: Skiddingtowardsretirement.com) Heather and Grant